The CDA manages Chicago’s O’Hare and Midway International Airports. Since 2012, we’ve worked with multiple CDA departments and 25+ external vendors to provide custom application development, 24/7 support and more. One of our biggest initiatives was the redesign and redevelopment of their public-facing website, Flychicago. In close collaboration with the CDA, we developed a modern and responsive website that met the latest needs of the organization. 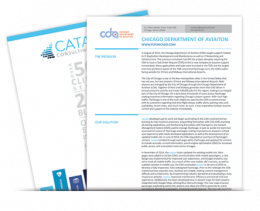 In August of 2011, the Chicago Department of Aviation (CDA) sought support related to IT Application Development and Maintenance as well as IT Networking and Infrastructure. The previous consultant had left the project abruptly, requiring the CDA to issue a Task Order Request (TOR) to find a new company to assume support immediately. Many applications and tasks were included in the TOR, but the largest and most pertinent aspect of the TOR concerned Flychicago.com, the CDA’s public-facing website for O’Hare and Midway International Airports.

The City of Chicago is one of the few metropolitan cities in the United States that has not one, but two airports: O’Hare and Midway International Airports. Both airports are managed by the City of Chicago through the Chicago Department of Aviation (CDA). Together O’Hare and Midway generate more than $45 billion in annual economic activity and create 540,000 jobs for the region, making it an integral part of the City of Chicago. On a daily basis thousands of users access Flychicago seeking important information regarding Chicago’s airport system. With such high traffic, Flychicago is one of the main platforms used by the CDA to communicate with its customers regarding real-time flight delays, traffic alerts, parking rates and availability, recent news, and much more. As such, it was imperative Catalyst assume control and support of the website immediately.

Catalyst developers got to work and began acclimating to the CDA’s environment by learning its main business processes, acquainting themselves with CDA staff, assessing all existing applications, and familiarizing themselves with Sharepoint, the Content Management System (CMS) used to manage Flychicago. In just six weeks the team had assumed full control of Flychicago and began making improvements toward a refined user experience with newly developed applications as well as the development of an updated mobile site. In June of 2014, the CDA requested an overhaul of Flychicago’s content. Catalystcombed through each page within Flychicago and updated the content to include accurate, current information, search engine optimization (SEO) for increased public access, and a consistent voice across all pages.

In November of 2014, the Catalyst team updated the existing mobile site. New pages were added to aid the CDA’s communication with mobile passengers, a new design was implemented for improved user experience, and Google Analytics was set to track all mobile traffic. As a result of the new mobile site’s success, as well as a global increase in mobile use, the CDA contracted Catalyst in January of 2016 to develop a fully responsive, fully redesigned Flychicago. Prior to the redesign the CDA maintained two separate sites, desktop and mobile, making content management difficult and cumbersome. By implementing industry standards and developing a fully responsive website, Catalyst improved maintenance efficiency and overall end user experience. Additionally, the team developed new in-airport maps for both airports integrated with Google Maps utilizing Blue Dot technology. The new maps improve passenger wayfinding within the airports and allow the CDA to promote its many concessions directly to passengers, increasing overall revenue. The new site launched in March of 2017.

The 2014 content overhaul increased inbound traffic on the desktop version of Flychicago by 50% or 15,000 hits in one year.

The 2014 redevelopment and redesign of Flychicago’s mobile site increased mobile traffic by 633% or 306,144 hits in one year.