And our celebration of our Customer Success team continues! As a natural follow-up to last week’s Meet the Team, we’re pleased to share more about another Customer Success Manager here at Catalyst, Eric Talwar.

Eric has been with Catalyst for over five years now. During this time, he’s been responsible for managing our responses to different competitive solicitations and making the case that Catalyst is the best team to do the job. Eric is intimately familiar with the different pain points our clients in state and local government, aviation, utilities, non-profit, higher ed, and healthcare face when navigating outdated legacy applications, and he is eager to bring our team into their workspaces to modernize their IT environments and streamline business processes for a more productive workplace overall. Eric warmly notes there’s never a dull day at Catalyst!

Outside of the office, you can find Eric cooking, volunteering at a local cat shelter, and finding any excuse to spend time in the great outdoors.

We’re celebrating this week’s Meet the Team with another one of our designers, Eric Podlin!

Eric’s work encompasses any sort of design and UI/UX work as well as some front-end development. Eric’s creativity took the front seat as he contributed to the designs of the CHI311 Community Portal and the CHI311 mobile app for iOS and Android. As such, he warmly mentions that his most memorable experience as a Catalyst team member has been playing a role in the implementation of CHI311.

Eric first discovered his love for design in his high school years but decided to pursue it as a career after a profound conversation with a college professor. Eric has been with Catalyst for over a year now and notes he loves the profession so much because it’s constantly changing – and therefore easy to not get bored!

Outside of work, you can find Eric playing video games, diving into a great read, and enjoying a night out at the movies, a concert, and the theatre.

Let’s give a warm ‘Meet the Team’ hello to Kevin Porter, a Web Developer here at Catalyst. Kevin’s work encompasses front-end development and website design, and he also contributes to various graphic design and video editing projects for clients and internal purposes.

Kevin started working at Catalyst after being notified of a job opening by one of his best friends, who just so happens to work here as well.

Kevin recently celebrated his one-year Catalyst anniversary and notes he’s learned so much that, though it wasn’t directly UI/UX-related, has still proven to be extremely useful in his day-to-day work and life.

After work, you can often find Kevin playing Super Smash Bros with coworkers. Talk about team bonding! Thanks for sharing, Kevin.

Say hello to Anthony Lungaro for our first Meet the Team of October. Anthony is a Junior Geospatial Analyst at Catalyst responsible for validating location data updates for the CHI311 solution we implemented for the City of Chicago, working with Salesforce’s Field Service Lightning, and QA testing.

Anthony enjoys working at Catalyst because he has a hand in the technological advancements that are moving local government and the public sector forward. He is particularly enthusiastic about working with a client as large as the City of Chicago and notes that his work with the City’s 311 implementation has been his most memorable experience at Catalyst thus far.

Outside of work, you can find Anthony looking for any way to be active, from playing basketball to attending concerts to skydiving. Thanks for sharing, Anthony! 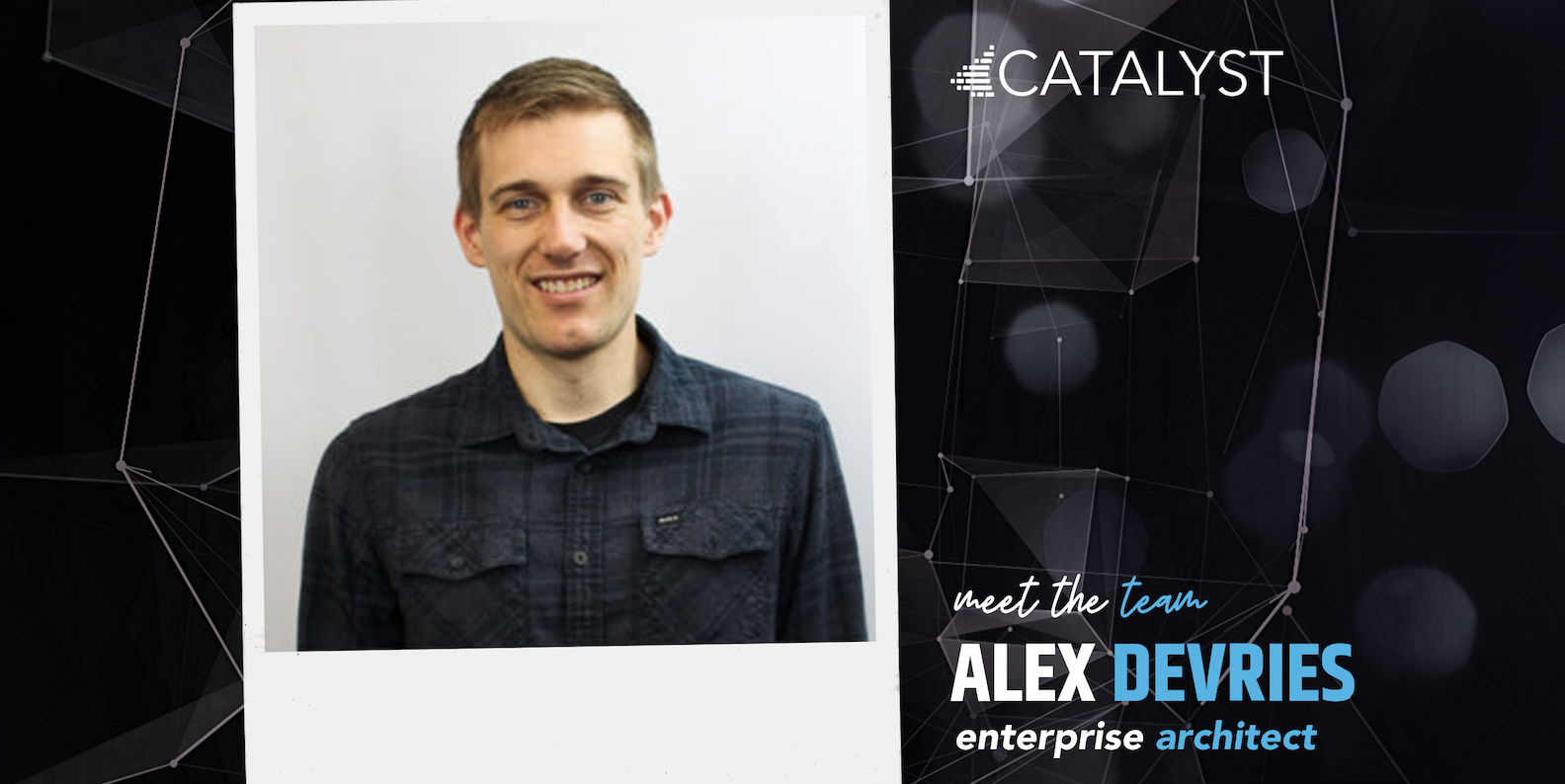 Today, we’re excited to share more about one of our Enterprise Architects, Alex Devries. As an Enterprise Architect, Alex is responsible for designing and implementing solutions that optimize business processes while remaining focused on performance, scalability, and data integrity. 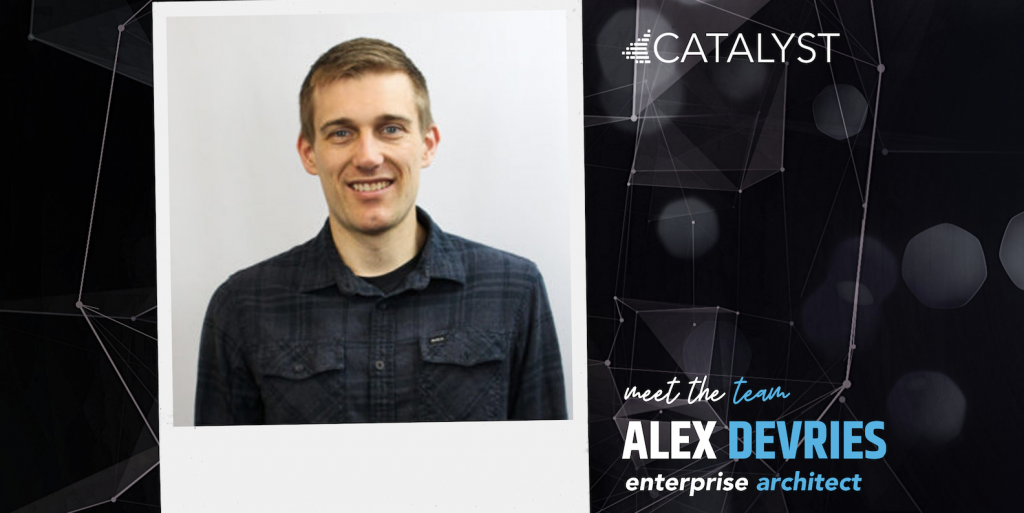 Alex recently celebrated his ten-year anniversary at Catalyst; he credits his high school AP Computer Science course, as well as his college curriculum, with opening the door to the world of software engineering and the career possibilities that stem from it. In his 10 years here, Alex notes that his most memorable experience has been being part of the team that launched #CHI311.

Outside of work, you can find Alex seeking out a live concert or adding to his LP collection. In fact, Alex has curated a playlist to accompany his feature this week! Listen here: [Math and Shoegaze].

Arvin founded Catalyst in 1992 after working and traveling as a consultant. He was eager to dive into the “messiest, most challenging projects” because he found them to be the opportunities through which he would learn the most. However, in his experience at different firms, he noticed a gap between tech leadership and business leadership. With the goal of bridging the gap between technology and business, Arvin started our company.

Throughout Catalyst’s nearly 30-year history, Arvin notes the most memorable and rewarding experiences have been the times when Catalyst, a small business, won large projects while competing against “brand name” consulting firms. It goes to show that a company’s reputation must extend beyond how many offices it has or how many thousands of folks it employs; instead, the skillset, drive, and experience of the team is key to meeting and exceeding the expectations of clients.

Arvin has continuously advised the Catalyst team throughout the company’s history to treat every client like it is our only one. This guidance has become a Catalyst “creed” of sorts.

Outside of Catalyst, you can find Arvin reading or watching documentaries, noting his favorites are pieces about business leaders and athletes. He is also a third-degree black belt in Hapkido and now instructs young people in martial arts.

We thank Arvin for creating the workspace we know and love today. His constant encouragement and advisory of our team has contributed to our success tremendously.

We return for another #MeetTheTeam Monday with one of Catalyst’s Software Engineers, Mike Anderson!

Though his “specialties” are .NET and Java solutions, Mike is an expert-level problem solver who is eager and quick to learn new technologies in order to get the job done. Mike’s interest in tech was spurred during his freshman year of high school, where he spent his days working on a Macintosh LC. Before long, Mike was building websites and helping his physics friends with C++…and the rest is history!

Outside of Catalyst, you can find Mike adventuring with his wife and son (pictured above), trying out a local brewery, or jamming on either acoustic or electric guitars. Rock on, Mike!