At the airport, there is no shortage of lines to stand in and guidelines to follow. Catalyst’s biometric exit application works to reduce passenger wait times to board planes while enabling airlines to comply with congressional mandates regarding international travel.

A Brief History Lesson: Why Biometric?

Discussion of biometric technology at a legislative level in the US dates back to 2002, prompted by the September 11 terror attacks. The Department of State (DoS) and the Department of Homeland Security (DHS) were authorized to use biometric technology to screen non-American citizens entering the US to ensure they could legally step foot in the country. Shortly after, additional legislation permitted DHS to collect biometric data from non-US citizens exiting the country, citing the 9/11 Commission Report’s affirmation that a dual biometric entry and exit program was “an essential investment in our national security.”

It took years for this biometric entry and exit program, as documented in legislation 8 U.S. Code § 1365b, to be fully fleshed out nationwide. While the use of biometric technology in airports initially focused on non-citizens in response to national security concerns per DHS and Customs and Border Patrol (CBP), the Transportation Security Administration (TSA) has also advocated for its use to improve the travel experience of passengers – American citizens and non-citizens alike – by reducing the wait time to board planes.

In 2019, the team at the Chicago Department of Aviation (CDA) consulted Catalyst’s software engineers to build a custom biometric exit application for use in terminals facilitating outbound international travel at Chicago’s O’Hare Airport. At this point, the Catalyst team had already delivered custom application development and infrastructure services for over a decade at CDA, and CDA stakeholders trusted our expertise to develop this critical application that fulfills a congressional mandate and enables the boarding process to move in an expedited fashion.

The tablet is attached to an adjustable arm to accommodate passengers of different heights.

Catalyst’s biometric exit system supports a one-step and two-step verification process to determine whether an individual can proceed to board an outbound plane to an international destination. The system’s build was informed by the CDA’s correspondence with CBP, as well as our team’s discussion with American Airlines to successfully integrate our system with their traveler database. Our system is powered by Microsoft, and the primary piece of hardware involved is a Microsoft Surface Pro Tablet.

Two key elements are examined when a traveler tries to board: 1) a boarding pass that confirms they are entering the correct flight and 2) a person’s identifying information to validate they are indeed the boarding pass holder.

From a Passenger’s Perspective

Let’s meet our international traveler, Theo, an American visa holder originally from Spain. Theo is departing Chicago O’Hare to visit family in London and waits at his gate to board.

In the two-step process, Theo walks to the airline agent manning the desk and standing next to a passenger-facing tablet. This tablet takes his photo – essentially a headshot – and will display either a green checkmark or blue “X,” denoting whether he can continue boarding the plane.

If Theo is cleared to board with a green check, the agent will also scan his boarding pass using the technology at the gate, and he’s on his way.

A blue “X” will appear if additional information from Theo is needed prior to boarding the plane, at which point he will need to be manually processed by an agent. In the most severe cases, law enforcement may enter the scene if concerns about his ability to legally leave the country escalate.

In the one-step process, Theo again walks to the agent and passenger-facing tablet to have his headshot taken. If the green check mark appears on the tablet screen, indicating he can board the plane, the passenger-facing screen also displays his seat number on the flight, eliminating the additional step in which an agent scans his boarding pass. If a blue “X” appears, an airline agent will manually process Theo. 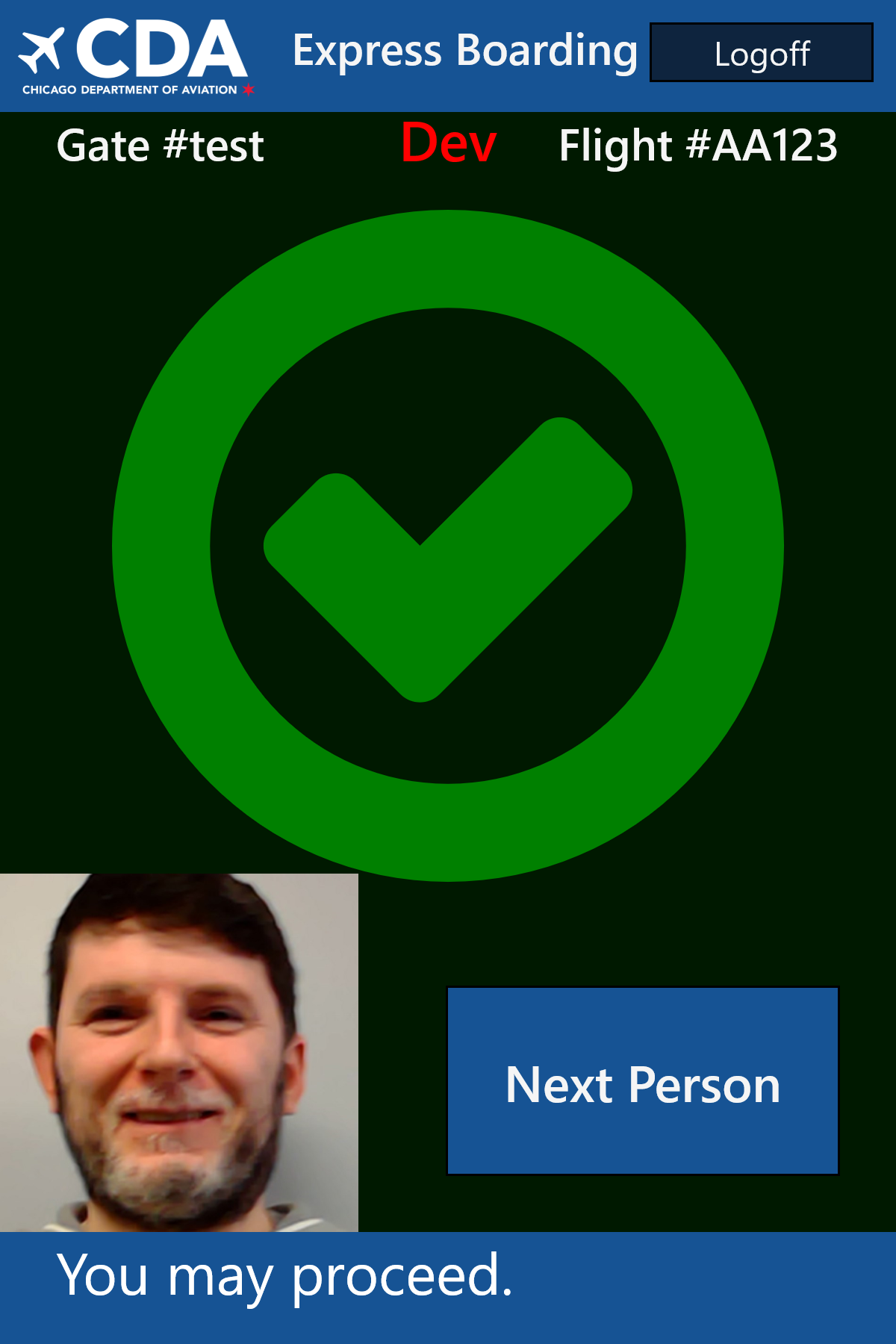 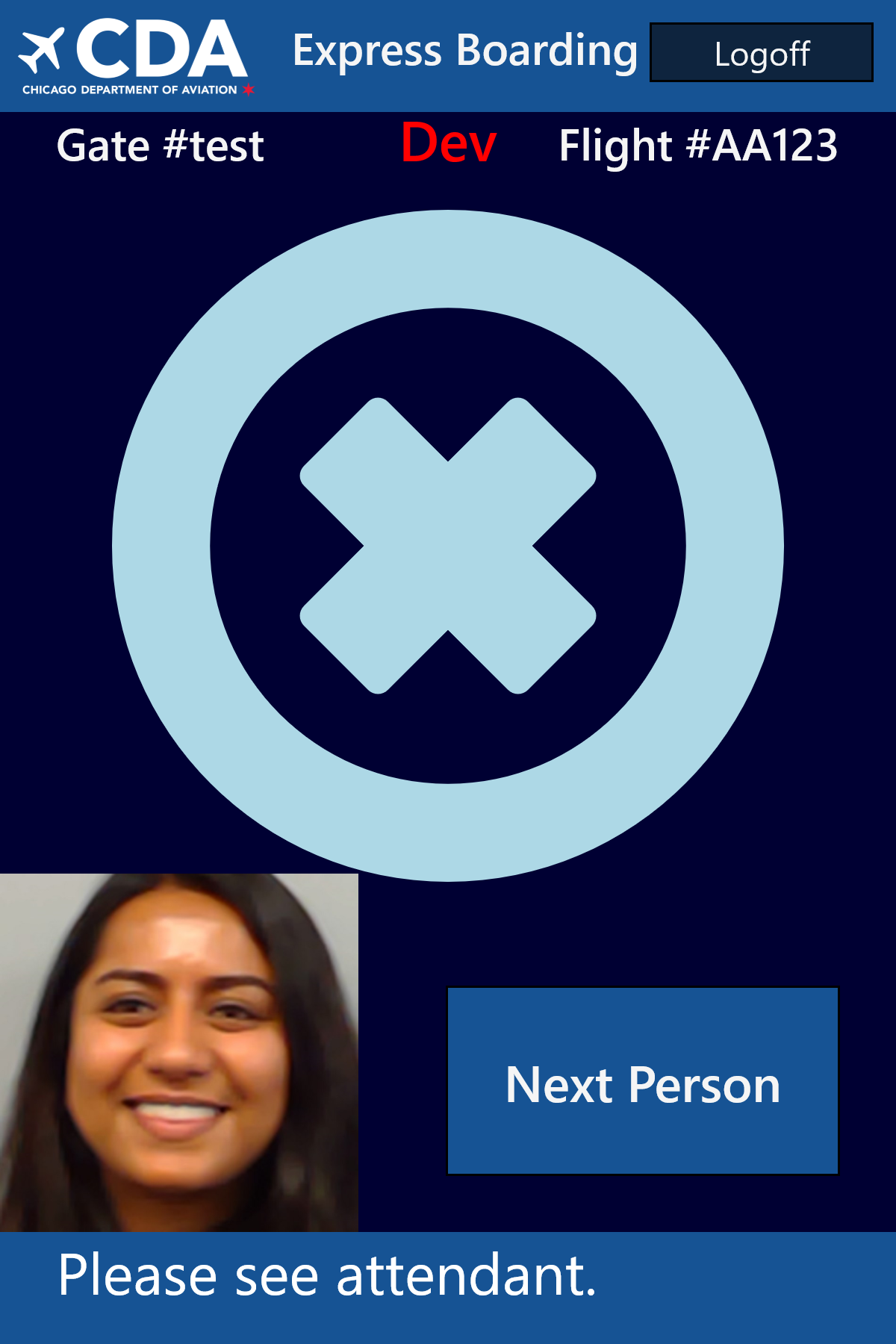 The passenger-facing tablet will display whether the international traveler can board the plane. In the one-step process, the “You may proceed” display will also return with their seat number.

In both two-step and one-step scenarios, the verification process that returns a green check or blue “X” takes place within three seconds to keep the queue moving as effectively as possible.

What’s Happening on the Backend in Those Three Seconds

This verification process happens in the blink of an eye from travelers’ perspective, but there’s a lot that happens on the system’s backend in that time.

Let’s return to our example with Theo.

In the two-step process:

In the one-step process:

Notably, if folks prefer not to have their photo taken at their flight’s gate, they can notify an airline representative that they wish to opt-out of the biometric program. Their verification process will then be completed manually by an airline agent. Photos of those who do opt-into the biometric process are deleted immediately from Catalyst’s system, and no personally identifying information is ever stored in our application.

Catalyst is currently expanding our biometric exit system’s presence throughout O’Hare as we gain access to integrate with other airlines’ databases housing traveler information. This way, we can implement one-step verification processes for additional airlines besides American.

Likewise, we are testing voice recognition technology for the airline agent manning the gate. In its current state, the system mandates the agent to tap a button on the tablet screen in order to prepare it to take a new photo as they move through the boarding queue. After passengers complete their headshot and receive the green check, blue “X,” and/or their seat number, the agent can say, “Next person, please” to reset the camera to take a new picture of the next passenger. This technology has been requested due to COVID-19 to minimize the need for agents to touch the tablet screen to queue up the next passenger.